Summer in the Garden with God

Installment Three: In Which I Battle Blackberries and Find a Rose 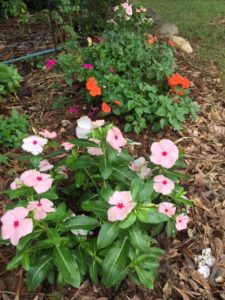 Apparently, the blackberries are still mad that someone put a house here.

Blackberries are insidious and amazing. The first thing to know is that you only get blackberries on old growth vines. So you have to let the briar-weaponized vines grow if you want the delicious dark fruit. And they grow by spreading their roots. I’m convinced the land masses of the earth are merely one big blackberry root and we’re all just sitting on top of it. They constantly send up new shoots as the roots spread, almost always in the middle of my flowers and bushes.

Which meant they had to go. Honestly, I’d let them grow except for the spreading thing. I love the blackberries. When I first moved in, I would get quite a few. But then the birds discovered them. I have a fantasy that I will get more of the berries than the birds. Ha! Just made myself laugh! Ah well, hope is a thing with feathers. Nice. I will have to remind myself to quote Emily Dickinson more often. 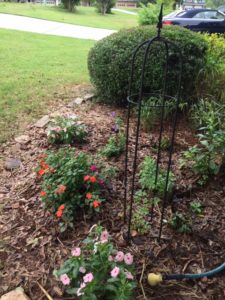 To be sure I felt a little guilty about not going to church this fine Sunday morning. But there was the matter of running into HIM. I had spent nearly a year accidentally falling in love with someone who was just supposed to be a friend. Not a good thing when the other doesn’t feel the same. Now I had spent almost a year trying to fall out of love. Getting there, I hope. But I just wasn’t up to seeing HIM. Not yet.

As I was pulling out the blackberry vines, I noticed an astonishing thing. There was a rose coming up, all on its own! About a foot high with two small tentative shoots and healthy green leaves. I cast my mind back but could not remember planting any rose there. I suppose the birds must have helpfully deposited a rose hip, maybe from the climbing yellow rose the yard guy so helpfully pruned back to death. It’s the only rose I have had that makes rose hips.

I showed the shoots to my brother and he opined that it was probably a Cherokee rose. They grow wild in Georgia. Named for the Cherokee whom the settlers found growing them when they arrived, the Cherokee Rose blooms in the spring with clusters of tiny gorgeous whitish pink flowers. They only bloom a couple of weeks. But when they do, they are a cloak of beauty on any fence or wall they grace.

If this little volunteer turns out to be a Cherokee Rose, that will be fine with me. To have any rose arise on its own is a small miracle. I guess we’ll see when it blooms.