Summer in the Garden with God

Installment Four: In Which I Wish the Chinese Had Kept Their Mimosas to Themselves 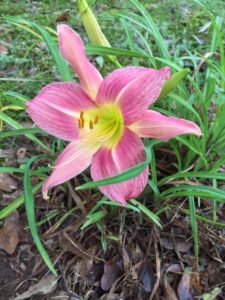 On Memorial Day at 5 o’clock in the morning I woke up in a sweat. Like a shot, I got on the computer and unsubscribed to the dating site Zoosk. For good measure I called the bank and put a stop payment on that monthly subscription fee. I think I’ve been wanting to do that for six months. Why was I on Zoosk anyway? What did I think I would accomplish? The men look, well, let’s be honest, they look scary. The ones my age really look old. Wilford Brimley old. Santa Claus old. Maybe I look old too. But if I do, kindly do not inform me.

The ones who looked like they might be worth considering, the few that I responded to, usually turned out to be jerks. Only twice did I get to the part about having phone calls before meeting them. On the second call I felt like I was on a surreal audition. The guy kept asking me questions to check off his list to see if we matched. That’s a very strange way to get to know someone. In the days before computer dating, you met someone that you saw someone across the room, or at work, or at church. There was chemistry. You got to know each other. And maybe you clicked. Now it’s sort of backwards. Now there’s this huge rush to get to know someone before you meet. So that you can get to the part where you have some chemistry. I don’t know. Maybe I’m still built for the 20th century.

Or maybe they’re just not HIM.

On Saturday before Memorial Day, my nephew was here and he helped me move that old sofa out from downstairs to take it to the dump. Which nearly killed me since I had originally paid $1300 for that thing. I hate to see good furniture go to waste but the cats and had had their way with it. In the end I guess there was nothing else for it. We threw it in the dump and then we drove away. Now there’s a big space where that huge hulking mass used to be. And I’ve got to figure out what to do with what I have. And where to put all the crap that’s still down there. So, all things considered, it was much better to be working in the yard.

That Sunday morning I felt truly grateful as I worked outside in the cool morning breeze. I could see that the universe-mother nature-god, whatever you wanna call It, had given me lots of little gifts I didn’t even know I had. A Rose, a renewed Day Lily, and most important of all, the physical strength and the wellness around my knee to be able to take care of it all.

I also found over a dozen jonquil bulbs when I was digging up the front flower bed to put in the Impatiens. So, there was the start of my woodland garden.

And who would’ve thunk it? Right in the middle of all that dang Chinese Evergreen, the birds had thoughtfully transplanted a brand new Nandina.

But who could tell with all that bloody Chinese Evergreen? You know, pretty much everything from China is a pain in the backside. Chinese Evergreen, Wisteria, Mimosas. They all come in and just take over.

See, here’s the thing about mimosas.  You let one grow and next year you have four. The year after you have twenty. You can’t let mimosas in. Don’t do it. Don’t listen to them when they say, “I’ll be good. It’s just one little old me.” That’s like your teenager saying, “Don’t worry Mom and Dad, I won’t throw a pool party while you’re gone.” I know it makes beautiful pink silk flowers and smells wonderful when it blooms. But don’t be lured in. Your home will be on the evening news. Headline: The Mimosa That Ate The Suburbs. Trust me. Don’t do it.

Even with all my vigilance one snuck into the front flower bed. And it won’t go away. Not with incantations. Not with Roundup. Not with dynamite. Hmm, maybe dynamite.

In my defense I have cut it back every year. Even in the years when I did nothing else. Still it has persisted. At last I did the only thing I could: trimmed it back to be a bush until I can afford to murder it properly.

Or maybe I should just let it be. When it comes to fighting Mother Nature and the flow of the universe, sometimes giving in and jumping into the river is the only wise course. I think that if you have given in, that’s a hopeful sign. We always think that we can be in charge. That we can control it, whatever IT is. But that’s not always true. In fact, it is seldom true.

And yet we persist in pushing the river with our spoon.